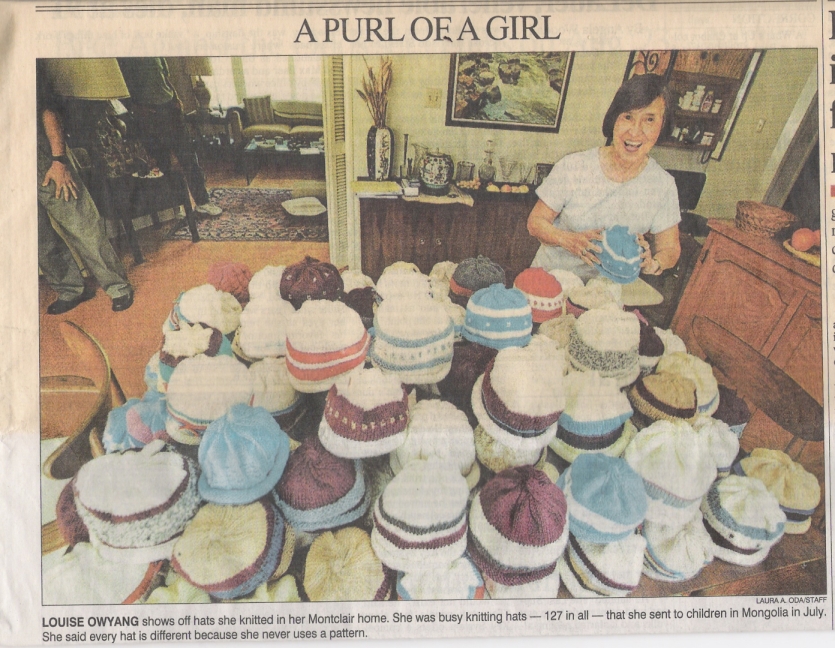 THE COLDEST CAPITAL in the world is Ulan Baator, Mongolia, where the temperature gets down to 40 degrees below zero. It's so cold, homeless people sleep in the heating ducts below the city.

But Louise Owyang, a Montclair resident, is trying to help. On July 1, she shipped 127 knitted woolen hats to Mongolia. She knitted them all herself over the past eight months, and no two hats are alike.

"I'll look at the yarn I'm using and think, 'This color ought to go with that,'" she said. "Then I'll add colors and patterns as I go along. It's a little bit like art."

So which hat is her favorite?

Owyang knits almost every waking moment, whether she's reading, talking, cooking, eating or watching TV. At age 82, she still works one day a week as a registered nurse in Stonestown, and she knits while riding the Muni Metro to her job, too.

"From my earliest years, I remember her always having her hands occupied," said her niece, Carla Din. "She has an amazing ability to create something beautiful in no time."

No yarn ever goes to waste. She often gets partway through something she's knitting and decides she doesn't like it. So she unravels it

and reuses the yarn.

But first, the yarn has to go through an elaborate treatment to get rid of all the kinks.

"I soak it in very hot water for a half hour to straighten it out, then I hang it in loops on coat hangers to dry. Otherwise, you end up with a ball of knots."

Owyang has been knitting since she was a little girl growing up in the Sacramento Delta during the Great Depression.

"My mother passed away when I was 7, and a neighbor named Fanny Mark took me under her wing. She was the one who taught me how to knit."

Though she has pursued other avocations, including painting and sculpture, she never stopped knitting. And her family and friends have been the grateful beneficiaries.

"That's why my wife and I had to have kids," joked Grant Din. "So she'd have an excuse to knit sweaters."

But two years ago, she started running out of people to give presents to, so she asked Carla Din to find her a worthy cause that could use knitted apparel.

Carla Din put her in touch with the American Friends Service Committee, which sends blankets to Afghanistan via a project called — what else? — Afghans for Afghans.

After knitting 30 blankets for Afghanistan, she turned to knitting hats for Mongolia, under the auspices of a nonprofit called the Dulaan Project. "Dulaan" is Mongolian for "warmth."

Now that the hats are safely off to Mongolia, she's embarked on a new cause.

"I'm knitting ski-type masks for our boys and girls in Iraq and Afghanistan," she said. "But they aren't very colorful. They have to be all black for night fighting."

HOW TO HELP
Tax-deductible donations can be sent to the Dulaan Project, F.I.R.E., 107 North San Francisco St., Studio 4, Flagstaff, AZ 86001. Knitters can get involved by visiting www.fireprojects.org/dulaan.htm.